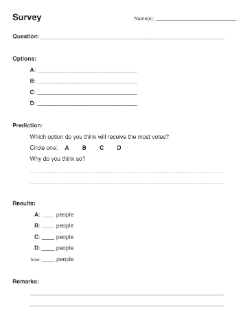 Have students work in small groups. Each group receives a copy of the Survey worksheet. The group should create a question and four options. If you find that your students have difficulty creating questions, you could print out a list of questions, cut the questions into small strips of paper, put the strips in a bag, and have student groups pick a question that way. If you do this, then all they have to do is think up four options as answers.

Ask students to discuss which option they believe will be most popular answer. Why do they think so? Ask them to fill out the "prediction section" section of the survey form.

We think "New York" will be the most popular answer, because recently, some Japanese celebrities have posted Instagram photos from Times Square and the Statue of Liberty.

To start, have the students put their reply scale on the board. For example: 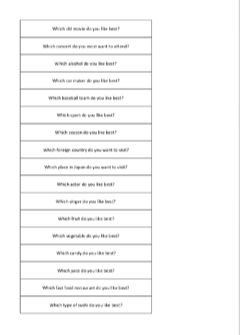 After their introduction to the survey question, they pose the question:

Where would you rather go to visit for a week?

The class replies all at once, using their Captur paddles to give their answers. The students should count how many of the class responded with each option.

After all of the votes have been counted, the students can write those tallies on the board, next to the options.

At this time, the teacher should tell the class to get into small groups to discuss their reaction to the vote tally, and to explain their reasons for their own vote. Even reluctant students seem to be more willing to become engaged in discussions after they have committed to an answer.

A follow-up vote could be taken later, to see if anyone has changed their minds.

Have students write their own comments on the survey. Did the results align with their predictions? Why (or why not)? Any surprises?

We thought that many students would choose New York City. But most students said "Tokyo." Maybe they want to speak Japanese and eat Japanese food every day. Or maybe it's because most of the students are from Kyushu, and they've never been to Tokyo before.

We believe that the prediction and the analysis stages help students think more deeply about the activity. These stages also provide good opportunities for expressing themselves in English.